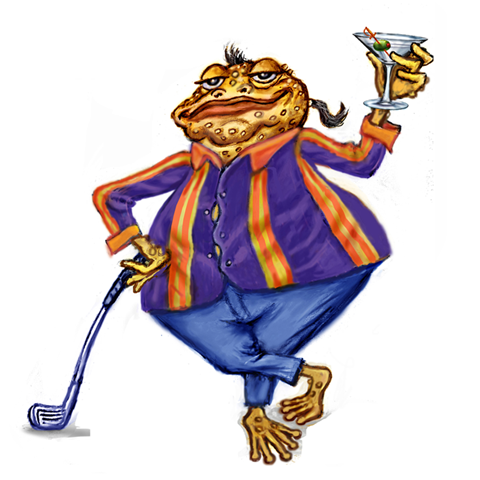 Meet Sergie, the “sugar papa” toad, who Zeni meets on an on-line dating site she joins to conduct some research for her chronicles. After posting a profile on the site and receiving a deluge of e-mails from men all around the world, none of whom capture her interest, Zeni decides to proactively search the members’ profiles when she comes upon Sergie’s profile.

Although Sergie is looking to meet a woman under forty, Zeni decides to e-mail him even though she is forty-two years of age. Seconds later, after sending her e-mail, Zeni has second thoughts and feverishly attempts to delete her e-mail. Thinking she has been successful, she is later surprised when she receives an e-mail from Sergie in reply.

Zeni and Sergie then engage in a hilarious e-mail exchange where each learns some surprising secrets about the other. Once their respective secrets have been exposed, Sergie asks Zeni to dinner. When Sergie arrives to pick her up for their date, though, Zeni is surprised by another secret he has been keeping.

What does Zeni discover when Sergie arrives at her home? Does Sergie grant Zeni a pardon for being over forty, or is she “over the hill” in Sergie’s eyes?

Find out more about Zeni’s escapade with the “sugar papa” toad in chapter eight. Zeni’s adventure into the world of on-line dating will leave you wondering if it is all it’s cracked up to be.

Zeni decides to try on-line dating to conduct some field research for her book. She meets Sergie on a dating site called “Sugar Papa”. Here is part of an e-mail exchange between Zeni and Sergie:

In reading through Sergie’s email, I realized he had uncovered my identity by the fact he referenced I was Italian and a lawyer. As I sat there laughing about his investigative success, I attempted to open the photo attached to the email.

After several failed attempts, the photo finally opened into a new window displaying a small headshot, measuring approximately one inch by one inch on my computer screen.

“Damn!” I said out loud as I attempted to enlarge the photo. “I can barely see him in this photo. And it’s only a headshot so I still have no idea what he looks like from the shoulders down.”

With my curiosity now at its peak, I sent Sergie the following email:

Ah, touché! As for being a good attorney, my reputation precedes me. I’ve attached some photos of myself with family members and friends. By the way, can you resend your photo in another format? I can barely see you in the tiny photo you sent.

Dredging the swamp while I await your response, Zeni 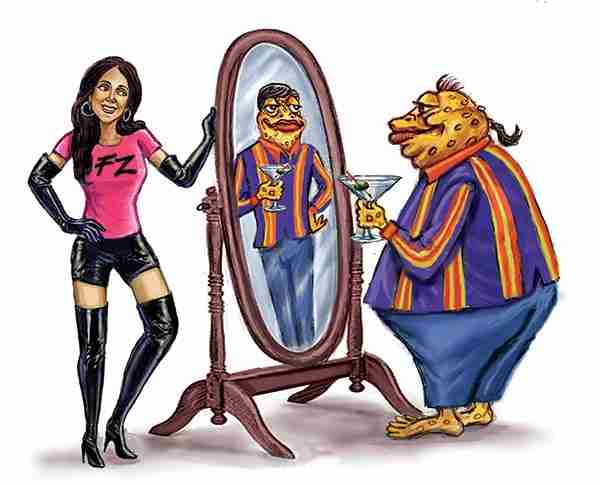 We use cookies on our website to give you the most relevant experience by remembering your preferences and repeat visits. By clicking “Accept”, you consent to the use of ALL the cookies. You can adjust your settings by clicking on the "Cookie Settings" button. For further information, please read our Privacy & Cookie Policy by clicking "Read More."
Do not sell my personal information (CCPA notice).
Cookie SettingsAcceptReject All Read More
Manage consent

This website uses cookies to improve your experience while you navigate through the website. Out of these, the cookies that are categorized as necessary are stored on your browser as they are essential for the working of basic functionalities of the website. We also use third-party cookies that help us analyze and understand how you use this website. These cookies will be stored in your browser only with your consent. You also have the option to opt-out of these cookies. But opting out of some of these cookies may affect your browsing experience.
Necessary Always Enabled
Necessary cookies are absolutely essential for the website to function properly. These cookies ensure basic functionalities and security features of the website, anonymously.
Functional
Functional cookies help to perform certain functionalities like sharing the content of the website on social media platforms, collect feedbacks, and other third-party features.
Performance
Performance cookies are used to understand and analyze the key performance indexes of the website which helps in delivering a better user experience for the visitors.
Analytics
Analytical cookies are used to understand how visitors interact with the website. These cookies help provide information on metrics the number of visitors, bounce rate, traffic source, etc.
Advertisement
Advertisement cookies are used to provide visitors with relevant ads and marketing campaigns. These cookies track visitors across websites and collect information to provide customized ads.
Others
Other uncategorized cookies are those that are being analyzed and have not been classified into a category as yet.
SAVE & ACCEPT